During the COVID-19 (Coronavirus) pandemic, Assosia have continued price tracking and monitoring promotional and pricing strategies across the main grocery retailers both online and in-store.

Our latest report tracking price and promotional activity, as featured on the BBC Breakfast show on Friday 24th April, shows a significant drop in promotional offers across Asda, Morrisons, Sainsbury, Tesco and Waitrose.

During this unprecedented time, with retailers and suppliers fighting to retain stock levels and avoid consumers stockpiling, the significant reductions in promotional activity are clear to see – as are the reasons why. 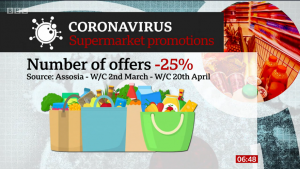 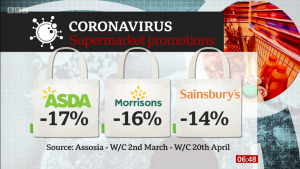 Tesco and Waitrose had the most reductions, down 40% and 46%. 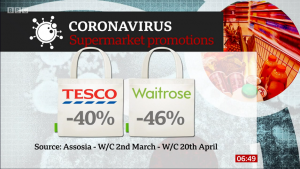 For Tesco, the biggest categories that were affected, were Baby, Frozen Food and Pet Care – all showing above 50% reductions in offers.

Waitrose followed a similar pattern with Baby, and Pet Care offers reduced by over 90% and Household goods by 65%. 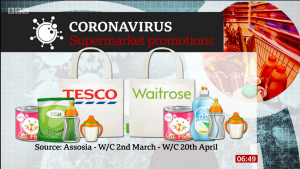 The crazy scenes of empty shelves, and shoppers needing to complete repeat visits to various outlets trying to hunt down essentials like toilet roll, handwash, antiseptic wipes etc. appears to have eased somewhat, however, with the hot weather, double Bank Holidays and ‘cabin fever’ setting in, it’s important that retailers hold their nerve.

Consumers were initially a little less worried about what offers were available, and focussing more on simply being able to purchase the goods they wanted or needed. With stock levels rising and stores replenishing more throughout the day (helped by fewer people being allowed in each outlet at any one time), consumers will once again expect offers to start increasing.

Reducing the number of promotions will also have helped cash strapped suppliers who bear the brunt of such deals.
With manufacturers and suppliers facing unprecedented demand for core products (whilst others are being classed as non-essential!), not having products on promotion will help keep the core lines available, and also focus consumers on purchasing what they need, rather than stockpiling and taking time searching for deals.

There are numerous cases where supplies have had to put head office staff on furlough, in order to keep the production teams and factory floors running, so again, less funding for promotions will hopefully help in the long run.

The last two weeks do show a slight increase in offers week on week; this will in part be due to restrictions being lifted on the number and type of products consumers can purchase, but also consumer pressure.

When the UK first went into lockdown, announced on Monday 23rd March, consumer panic buying was already underway. It took retailers some time to react to the surge in purchases of key products (although the reason for stockpiling toilet roll is still unclear). This is fully understandable when you consider this is an unprecedented time and something we have not seen the likes of before (certainly since WWII).

Despite some initial teething problems, both retailers and suppliers should be applauded for their handling of this crisis so far. It may have taken a while to get things in place, and whilst consumers may have been affected by having to pay slightly more for goods no longer on promotion during the last few weeks, with stock availability increasing and consumers starting to get more used to this new way of shopping, promotions are likely to continue to increase once they are sure the supply chain can continue to handle demand.

Multibuy / Meal Deals / Bundles were the hardest hit promotional mechanics (note Sainsbury only use Meal Deals and Bundles but not x for y, BOGOF or other multibuy mechanics). 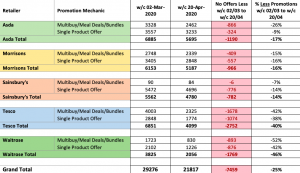 Watch our feature, on the BBC Breakfast Show, broadcasted on the 24th April here.