It may seem impossible to walk around a store without tripping over a chocolate egg or rabbit on promotional – but there are fewer deals out there than last Easter.

There has been an 8% drop in deals in featured promotional space in the run-up to this Easter (4 w/e 22 March 2015) versus the corresponding period last year, when Easter fell two weeks later (4 w/e 6 April 2014). 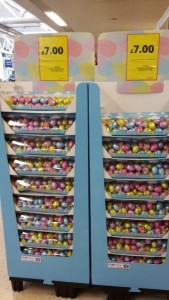 In last week’s magazine we examined retailers’ Easter promotions and revealed Asda was running twice as many deals as its rivals. This week, we look at the brands’ activity, and Cadbury rules the roost with almost twice as many deals on Easter confectionery – eggs and novelties – than nearest rival Nestlè. Year on year, Cadbury has slightly increased its offers from 112 to 115, with Easter confectionery accounting for just under a quarter of all featured space deals the brand offered.

The decline in Easter activity was a result of Nestlé, Mars and Thorntons all running fewer deals than last year. Thorntons recorded the biggest drop in percentage terms, with just 10 deals this year versus 24 a year ago – though it hiked up the average depth of deal from 19% to 32%. Licensed character egg supplier Kinnerton has bucked up the trend, doubling its number of deals year on year to 18.

With the exception of Thorntons, all brands increased use of multibuy promotions, and such mechanics accounted for 41% of deals versus 35% last Easter. “Brand loyalty will often go out of the window when it comes to Easter eggs,” says Kay Staniland, MD of analysts Assosia. “Most consumers will need to purchase multiple Easter eggs and will select them based on the perceived best value, which often means cheapest.”

Easter activity has driven a month on month increase in the total number of featured space deals offered by the confectionery brands, which in the case of Nestlé was up 60.5%.

In terms of the general landscape, the retailers’ focus on brand price activity is reflected in the total number of own-label deals remaining down year on year despite a 14.9% hike versus last month.