Are supermarkets doing enough to keep the prices of groceries down?

Amid soaring demand, supermarkets have been careful not to increase prices, but with promos axed to stabilise supply the effect is inflationary

Grocery sales are soaring during the UK’s coronavirus lockdown, but supermarket bosses are warning this spike in demand has come with costs that more than outweigh the increase in sales.

So have supermarkets been tempted to increase prices to mitigate these extraordinary times? Is there inflation on the supply side? And what likelihood is there of them passing costs on to the consumer?

As with much relating to the coronavirus outbreak at the current time, the data points to a mixed picture on shop shelves.

The GPI found year-on-year supermarket inflation stood at 0.42% for the month, which was down on the 0.56% annual inflation recorded in February. In fact, Asda’s prices fell into annual deflation during March.

Similarly, the BRC/Nielsen Shop Price Index last month, and Kantar’s inflation figures for March – based on actual sales data – both picked up little discernible movement – the former found food inflation eased to 1.1% in March, down from 1.6% in February, while the latter reported grocery inflation unchanged at 0.9%.

However, last week the Office for National Statistics recorded a spike in prices for ‘high-demand items’ of 4.4% since before lockdown began. Prices were also rising, by 1.8% in a single week, driven by increases in goods such as petfood, rice, nappies and handwash.

What’s going on? Despite accusations of profiteering, the most likely explanation for inflation is the widespread reduction in promotional activity, to cope with the coronavirus-driven spike in demand.

Data compiled for The Grocer by Assosia shows the total number of supermarket promotions across Tesco, Sainsbury’s, Asda, Morrisons, Waitrose and Ocado, plunged by almost half – from 35,197 in the week beginning 16 March to just 18,838 in the week starting 6 April.

Opportunism? Perhaps, but Richard Lim, CEO of Retail Economics, believes “getting rid of some of that promotional activity is a completely logical approach” given the enormous transference of spend from the foodservice sector, and the resulting shortages.

It’s notable, therefore, that overall promotions ticked back up again to 24,906 in the week commencing 13 April, the highest number for a month, though still lower than pre-Covid.

The lifting of restrictions on most items as supply has stabilised has helped, says Staniland. “Suppliers have also had a chance to try and catch back up on production, making stock availability easier to manage, so we will slowly start to see offers and promotions creeping back up.”

Those sectors that have seen the biggest month-on-month drop-off in promotions seem to mirror some of the ONS data.

However, Assosia’s data picked up little in the way of underlying price hikes.

There are a few isolated product lines to have seen base price rises. Examples include Cow & Gate and Heinz babyfoods at Asda, Dolmio pasta sauces at Sainsbury’s and Berocca vitamin tablets at Ocado. 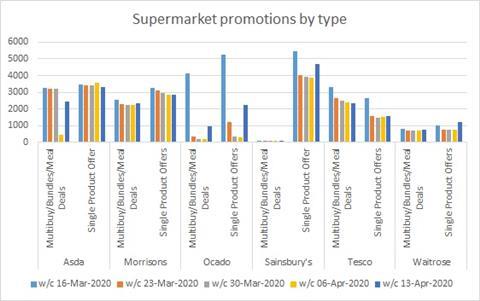 But Assosia found just 71 such items from the 10,600 it scraped to see base price rises, compared with 108 that have declined. Crucially, falling prices were also found among in-demand products like hand gels, soups and flour.

One supermarket boss told The Grocer it was being extremely sensitive to pushing through price rises in the current climate, even where underlying input costs were rising.

“I’ve been quite careful to say to our guys: ‘Look, although things are difficult, I don’t want to put any prices up.’”

“Even if the price of an underlying commodity was skyrocketing, I would give that a hell of a lot of thought before we pushed price rises through,” he adds.

That’s because supermarkets are acutely aware of the potential reputational damage, adds Lim: “The rules of engagement for retailers are completely different.”

He also points out that measures of grocery inflation may struggle to capture wider price movements, as rationalisation and delistings may distort like-for-like price comparisons.

At the same time there is underlying inflationary pressure building on the supply side.

While oil prices have plummeted, and spot prices in fresh produce commodities such as dairy and beef are in meltdown, the weak pound and increased distribution costs could continue to put pressure on suppliers – ultimately filtering through to supermarket prices.

The pound slumped to multi-year lows against the dollar and euro in mid-March and, although it has recovered somewhat, the considerable drop in sterling so far in 2020 could underpin further inflationary pressures.

Dominic Goudie, head of international trade at the Food & Drink Federation, believes “the fall in the pound is a problem for smaller businesses that can’t hedge against the impact of currency, but also for larger businesses that are having to buy in more ingredients to keep up with increased demand”.

“On top of all this, you have the challenge of where we are in the year. Some ingredients like tinned vegetables will be at that point where stocks are at their lowest and the new harvest hasn’t come in, so prices will be at their highest.”

However, the extraordinary collapse in the global oil price should insulate the industry from immediate inflationary spikes.

Stefan Vogel, head of agri-commodity markets research at Rabobank, says most commodities are down significantly since the coronavirus outbreak, driven by low crude prices.

Instead, he says, there may be pockets of inflation related to difficulties sourcing sufficient volumes of fruit & vegetables, and the mounting cost (up to 20%) of container freight prices amid the surge in demand for quick shipments.

Supplier costs are also likely to go up as factories are operating seven days a week rather than five, partly to meet demand but also to maintain social distancing.

And on the supply side, there are concerns seasonal harvests could rot in the ground due to a lack of workers on the ground, while on a global basis, foods like coffee, rice and vegetables may not be exported due to strict lockdowns.

And arguably the greatest threat to food supply is not the food itself but ancillary products running low like packaging, ink (for labelling) and CO2, with the possibility that current shortages in the US could also happen here. The food chain will grind to a halt without them, but are the risks of these shortages receiving enough attention?

Page 1 of 3
Published in The Grocer, 24 April 2020
https://www.thegrocer.co.uk/prices-and-promotions/are-supermarkets-doing-enough-to-keep-the-prices-of-groceries-down/604284.article
Read all Articles